Note: transfer from Brindisi airport or Lecce train station costs €30,00 per person. It excludes the costs of the contingent rent of the equipment. Additionally, the location of the dives can vary, due to the weather conditions and the Experiences may be adapted to the special needs of the participants.

The Neuralia, built in 1912 at Glasgow, Great Britain, was a troop ship, hospital ship in the Mediterranean Sea, passenger vessel and training vessel for English youngsters with destination Baltic Sea and the Norwegian fjords. In the WWII, the ship was back to military purposes. In 1944, after the invasion of the Allied forces, the ship was used as support vessel in the D-Day, performing 7 roundtrips, transporting Allied officers and soldiers on the French coast. The Neuralia story end on 1st of May, 1945, at Torre Inserraglio when, going to Taranto to collect German prisoners of war, bumped into a floating mine. It sank shortly after and the explosion killed 4 people. The wreck today is at a depth of 33 metres, about a mile from the coast. It was dismembered in the postwar period, to retrieve its crucial parts.

Climbing down from the top of the anchor, the majestic contour of the ship can be glimpsed between evocative trees encrusted with sponges (Axinella cannabina, Axinella polypoides, Phorbas tenacior, Aplysina aerophoba), moss animals (the false coral Myriapora truncata and the Reteporella grimaldii Sertella septentrionalis), and polychaetes (among which the amazing Filigrana implexa), surrounded by schools of fish. Reached 30 metres of depth, starts the search of the side wall, looking between the metal sheets for the numerous residents: Pinfishes, Stone Basses, Lobsters, Moray Eels and Conger Eels. Going back to the top. The right side wall is flanked, and it is possible to notice gas masks, military helmet owned by the crew and, before starting the climb back up, the impressive anchor laying on the posidonia. 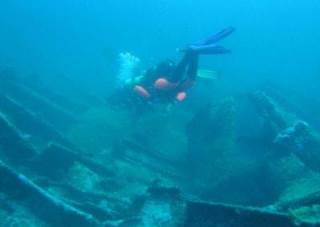 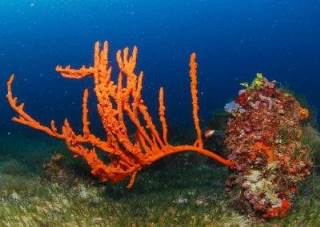 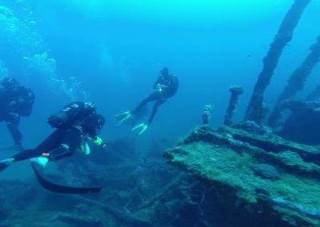 For over 60 years, on a sandy bottom at 35 metres of depth, 2 and a half miles west from Santa Cateina di Nardò, the wreck of a German airplane from World War II lies idle. It is a Junker 88, a two-engined made by the German Junkers GmbH. The wreck is on the sea bottom in perfect flight arrangement and in an excellent conservation status. 20 metres wide, 15 metres long, it offers unique emotions, thanks to is history and the ensemble of colors that flora and fauna gives it, bedecking the vehicle structure. Sea experts started to talk about the airplane with more details and approximately define its position only o 2001. Some years ago, after several researches and dives, scuba divers of Costa del Sud Diving Service di Santa Caterina di Nardò (LE), coordinated by Andrea Costantini (manager and diving instructor and one of the leading experts of Salentine sea bottoms), have reached, measured and explored the airplane. No human remains were found, which make thinks that the pilot managed to abandon the airplane before it sunk. 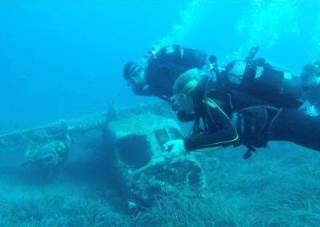 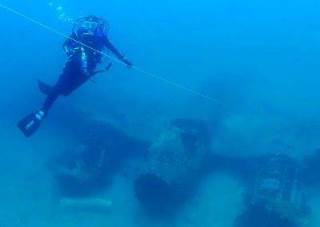 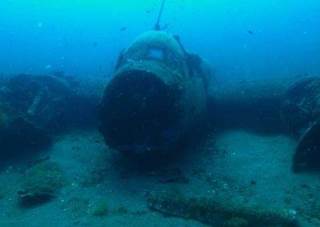 Sited in the stunning Cala di Uluzzu, in the sea area across from the Park of Porto Selvaggio (Nardò, LE), the Corvine Cave is the biggest cave between the ones identified in the area so far and one of the biggest of the entire Salentine coast area. The ample entryway of the hypogaeum (4 metres high, 8 metres wide) opens at a depth of 12 metres and lead to a spacious gallery long more than 10 metres. This first space has a barrel vault, hint of the probable phreatic origin of the cave and that resemble, in the conformation and in the dimensions, a road tunnel. The gallery leads to a big room. The centre of the cave, on top of which there are air bubbles, is 22 metres away. Spacious rooms at surface level among which Corvine Cave’s fairy tale reach an end. Stalactites and calcitic slumps decrate the sides of the two big air bubbles, the biggest of which has a diameter of more than 8 metres and is 10 metres high. The Corvine underwater Cave, in just over a year of study, revealed a number of surprises. The large volume, the typical dead end tunnel shape with a progression of approximately 60 metres, the presence of internal air spaces, separated from the outside and the presence of different substrates through its development are the reasons behind the high biodiversity, with a large number of species: 196. Of these, two are ew for the Italian fauna and three for the Science. 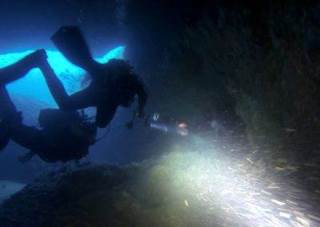 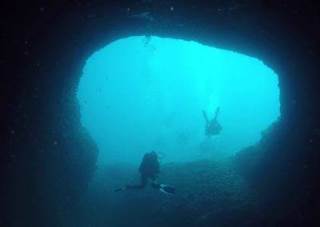 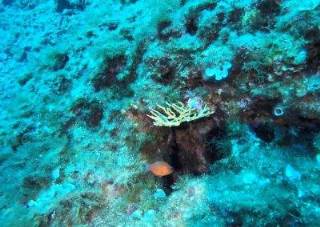 DIVE OF PORTO SELVAGGIO SIDE

The dive spot is reachable in 10 minutes of navigation and it is at the centre of “Porto Selvaggio e Palude del Capitano” park. The dive is chiefly on the Side, with colorful and full of life tunnels and passages under the arcade every now and then. Great schools of pinfishes and salemas flank the scuba divers to a vaste shoal populated by stone basses, lobsters, moray eels and Atlantic bonitos. Farer from the Side, laid down on the sand, a big admiralty anchor perfectly preserved. The dimensions – about three metres tall – anc the tipology of the anchor make you think to an evocative sailing ship of late ‘700, first ‘800. The dive, preferably made at night, ends with a suggestive visit to a genuine gallery digged in the rock, very colorful, home of various crustaceans and sponges, that encrust the sides. 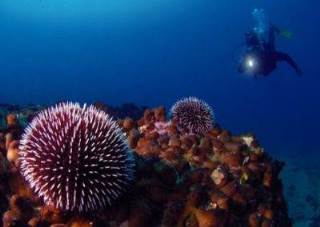 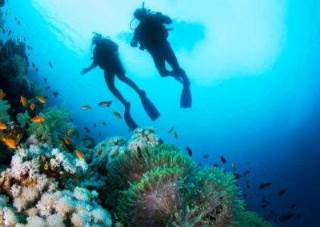 2nd Day: After breakfast, Dive at Neuralia’s Wreck. Traditional lunch on board. Dive in Corvine Cave. Return to the facility. Dinner at a typical restaurant. 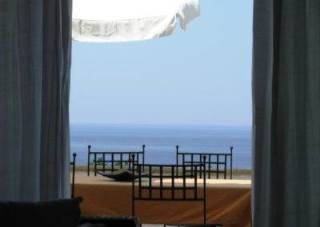 Send your request for the days you prefer